Alphabet Quiet Book: B is for Bumble Bee

This post is the third part in a series about the alphabet quiet book I'm making with the girls for preschool this year. To read the introduction, click here, and to read the rest of the posts (updated on a weekly basis) click the "Quiet Book" label on the right. 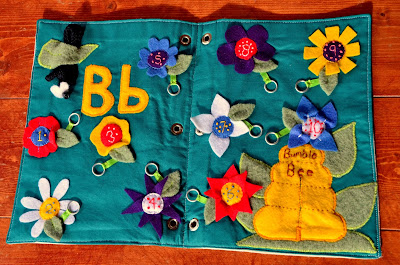 B is for Bumble Bee
Many of my quiet book pages are inspired by other examples I've found on the Web, but this one is directly from a tutorial and template by Stephanie at Imagine Our Life. She does some of the most beautiful quiet book pages I've seen, although also many of the most labor-intensive ones. Although most of the design process was taken care of by using the pattern, there was so much hand stitching that this page actually took me almost two weeks to finish. I love that the sequential lacing activity is different from many of the traditional quiet book pages, and that it doesn't have any loose parts. That alone makes the large amount of stitching worth it! 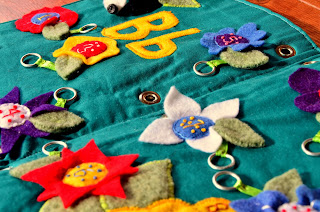 My modifications to the original design
My pages are smaller than the ones on the original design (8" by 10.5" instead of 9" by 12"), and I also had to fit in the letters B and b, so it took a bit of juggling to get everything to squeeze nicely. I used a fat quarter of teal fabric for the page  backing, since all my pages are made of woven fabric rather than felt. For the flowers I used various colors from a felt starter pack I found at Walmart for $2.50 - by far the cheapest way for getting a beginning palette of felt pieces that I found. The green for the leaves is cut from a felted wool sweater that I had in my stash, since I liked the thicker texture for the leaves and wanted a better contrasting green than the one available in the felt pack from Walmart.

Although I hand stitched the flowers, leaves, and rings together and hand embroidered all the numbers, I machine appliqued the large leaves, hive, and letters. The rings are large aluminum jump rings, which I had leftover from another project a long time ago and were just large enough to fit a pony bead bumble bee through. I couldn't find any pretty light green cord like in the example for the lacing cord, so I used a long black boot lace instead. It was just barely long enough to make it through all ten flowers and into the hive.

Two Page Spreads
A number of my alphabet pages are spread across two pages, but a few of them really need need to be joined at the middle rather than having a two-inch gap. This page is the first of my connected two-page spreads, and I made them essentially like the cover. The inside spread is assembled as one big piece, and then the back pages (in this case, Letter A and Letter C) are sewn together, with page 4 (C) on the left, and page 1 (A) on the right. Then I sandwiched the whole thing together just like I would a smaller page, sewed around three sides, flipped it right side out, pressed, and top stitched 1/4" around the outside. The only differences between this and the smaller pages is that I also sewed a line straight down the middle to help the page fold in half, and I applied two rows of grommets down the middle of the page to allow the rings to go through.

In general, I like the single pages better since they turn more easily, are less bulky, and are easier to add and remove from the book. Because of this, unless a double-page letter significantly benefits from being joined at the middle, I'll keep them as separate pages. Still, it's a handy trick to be able to use for the several pages that do need a large page spread. 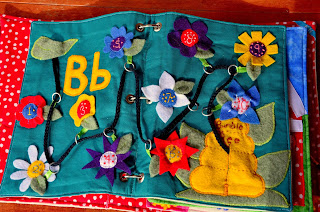 Preschool goals for using the bumble bee lacing page
While the previous abacus page was to practice tactile counting to ten, this page is to help the girls learn to recognize the numerals 1 to 10, and to place them in sequential order. Each flower also has a corresponding number of dots next to the numeral, so they can count dots if they don't remember the numeral. It's also good for practicing small motor skills, as little fingers thread the beaded bumble bee through the small rings. I was worried that the girls might have difficulty with this part, since the rings are just bigger than the bee and you have to push a little to get the felt wings to go through the hoop. Fortunately, they were able to manage just fine and enjoy threading the bee through the flowers very much.

Other letter B activities
Our Letter B week was kind of all over the place. We did some generic alphabet activities like drawing pictures of B things, especially the girls'10-year-old Uncle Benjamin, bouncing on a trampoline! We also read The Magic School Bus - Inside a Beehive, and ate honey sandwiches. But by far, the biggest hit of B week was watching Sesame Street's "Letter B." Laurel loves this song more than any other, and it was the first song that she would frequently sing to herself. Two months later, it's hard to remember this since she's always singing songs now, and doing the hand motions to go with them. But a couple months ago, shortly after she turned two, this song helped her overcome her self-consciousness and sing by herself out loud. It's still a favorite, and frequently requested by both girls.

This is the story

of how six Hobbits had an Adventure, and found themselves doing and saying things altogether unexpected. They may have lost their neighbors' respect, but they gained - well, you will see whether they gained anything in the end.
Adapted from J.R.R. Tolkien's "The Hobbit"